I’m excited to share this next post with you. I’ve invited my friend Terri Lawton, dairy farmer from southeast Massachusetts, to write a guest post about her farming operation and her background. Terri sells raw milk and is a technical 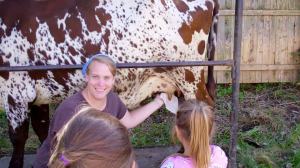 Terri, getting ready to give a talk about milking standards at a conference.

expert on the subject, raw milk food safety and regulation and has addressed national audiences about the topic. The last two posts I’ve shared have been about why raw milk is a somewhat complicated issue. I’ve said that even though we have decided to not sell it, we are not against other people selling or consuming it. Terri and I spoke about my recent experiences and my posts and I was thrilled when she agreed to write about what she does with a few suggestions regarding raw milk, if you are interested. She can be found on Facebook and has her own blog at terrilawton.wordpress.com and okarealmilk.wordpress.com.

I’m an 11th generation farmer. I grew up on my parents’ dairy farm in Foxboro, Mass. I always loved cows, and spent most of my time on the farm as a child, pretending to be a cow, feeding the cows, milking the cows with my parents or gettingmy 4-H calf ready to show.

When I finished high school, I went to college and studied agriculture. I got my associates degree in Production Agriculture, with an emphasis on feedlot management from Northeastern Junior College in Sterling, Colorado. Because I felt like I still had a lot to learn about farming, I transferred to Purdue University where I was a double major in Animal Agribusiness and Agricultural Communications. I was also in the crew club, dairy club, and Agricultural Communicators of Tomorrow. I also did livestock judging for three years of school and dairy judging with Purdue.

Because I had a strong background in dairy and several food science/food safety classes at Purdue, I thought that being a dairy inspector for the Commonwealth of Massachusetts would be a good way for me to get involved in the agricultural industry in Massachusetts. Several farms I inspected were selling raw milk directly to families. I had been drinking raw milk my whole life. I was amazed when I realized that some people drove more than an hour to get raw milk.

After I finished up as a dairy inspector, I wanted to get closer to farming. I enjoyed being around cows, and owned several which my parents milked for me. I had planned to start making cheese, but needed an income while we were building the cheese room, and developing our cheese recipes, which is why I looked at selling raw milk retail.

I knew that my experience as a dairy inspector could help me harvest and bottle a superior raw milk. After developing a milking and bottling protocol that minimized potential risk, having the farm and retail area inspected by the dairy inspector, and having my milk meet exceptionally high standards, I received my license to sell raw milk in March of 2006. I started selling raw milk from grass fed cows on a pre-order basis so that I could ensure people got the freshest possible milk. Usually it was only a couple hours old when customers picked it up and brought it to their homes.

I decided to put food safety and integrity first from the beginning.

I know that selling and drinking raw milk can be risky. Based my experience as a dairy inspector, education at Purdue, and personal research about food safety and microbiology, I believe it is a risk that can be managed successfully. I also have seen farmers that were not up to the rigorous integrity and obsession with food safety that I think is necessary to do a good job producing raw milk for retail sale. However, for some farmers it is not much of a stretch to produce an exceptionally high quality raw milk.

I am grateful to be able to sell raw milk directly to families. I like having the folks come to the farm to pick up the milk. I enjoy meeting folks that care so much about food and supporting their local farmer. If I could encourage raw milk drinkers in one thing-please get your milk from a licensed raw milk retailer. It is a lot of work to keep raw milk clean. Inspected farms are held accountable, and must adhere to standard good practices. Integrity is very important in selling raw milk. Our customers need assurance that we are working hard to keep the milk safe. Inspections, milk quality testing and licensing are good tools to provide that assurance.