Just saw that phrase online somewhere, and could not resist. People sometimes ask how I got interested in agriculture. What follows is the very beginning of my farm story.

Some days I’m still amazed that I live on a farm. Being a farmer was a dream as a little girl, along with being a vet, college professor and a UN ambassador, but somehow the farmer one stuck. I started my path in agriculture with my family and my own 4-H dairy project, though we never lived on a farm.

The cows enjoying a late summer day with Wheeler Mountain in the background.

Retired now, my dad is a United Methodist minister and my mom is a nurse. We moved around a little while my dad served his calling, but always found a place to keep our cattle where we could help with farm chores – mostly daily, although at couple of times the cows were a distance away from us.

It all started when my dad was serving a church in Spencer, Mass. At the time Spencer was still a fairly prominent farming community with several dairy farms in operation. One of the local farming families were members of the church and the farmer’s wife was an Extension Agent. She kept an acre of land and invited people who didn’t have a spot of their own to come to the farm and grow things in her garden. My mom, who was a city girl, reluctantly decided to give it a try, and brought my older siblings along with her.

The farm is a quintessential New England farm. Set in a rolling pastoral scene, the place dates back to a time where Indians were a big concern – there is even a small hiding spot next to the main fireplace in the farmhouse for hiding if a raiding party was known to be in the area. They milked Jersey cows, which is where my love for Jerseys comes from. I can even remember two old girls, one whose name was Venus, they retired but kept and lived to the ripe old ages of 19 and 21.

My mom kept her spot in the garden for several years and learned a lot not only about growing things, but about the rest of the farm too. My parents even helped when they could – whether it was doing hay, other chores or helping with the cows and calves. At some point, the farming couple’s grandchildren who were close in age to my older brother and sister started getting their 4-H calves ready for the local fairs. My sister and brother wanted to be a part of the fun too.

Despite my parent’s explanation about not living on a farm and not having our own place to keep cattle my siblings wouldn’t give up hope for their own 4-H calves. Mom recalls with specific detail the look of disappointment on my older brother’s face when they revealed a Silver Fox bicycle instead of a little brown calf on his birthday one year.

I’m not sure if either of my folks can pinpoint the exact day or instance when they thought maybe they could figure out how to keep a couple of calves. My mom will tell you she learned that you shouldn’t get in the way of God’s plan. Regardless, soon after my brother and sister started 4-H with their calves, Katrina and Rainbow, and the rest is history. 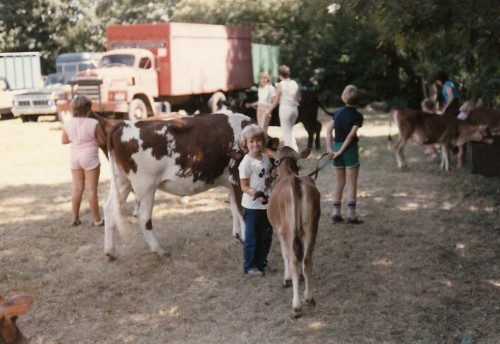 One of my big days in a kiddie class.

Being the tag along little sister, I COULD NOT WAIT to get my own calf. I tried to brush their calves, lead them in the kiddie classes at local county fairs or go with them to the farm while they took care of their animals. I’m sure I was a pain and got in the way a lot, but I don’t remember caring. Finally, when I was nine as of January 1, we went to pick out my first calf.

Of course I fell in love with the first one I laid my eyes on. Her name was Annabelle, and she was the sweetest, prettiest calf I ever saw. Unfortunately, as far as calves go, Annabelle was really a bit on the ugly side and she contracted coccidiosis sometime along the way, which stunted her growth. I was only able to keep her two years but then got my second calf – Ivory.

Suffice to say I didn’t have great luck with my first two calves. It wasn’t until I bought a calf from my older brother that my luck started to turn around. Her name was Koral, who was a descendent of his first cow Katrina and we still have family members in our herd today.

So that’s how I got started in farming. Some days I still can’t believe I’m living out my childhood dream of being a farmer, married to a farmer, raising my kids on a farm and holding on to these Jerseys that came into my life so very many years ago.

Of course, there’s lots that has happened between then and now. But I’ll save some of that for another post.