Happy New Year! I just spent the week between Christmas and New Years off from work. It’s the first time I’ve ever done that, but TK’s daycare was closed and so went the decision for me, really. Of course there are those of us out there who can never really power down from our jobs, but I think that’s okay as long as you have balance.

siblings. Yes, I was very sentimental (pregnancy helps enhance those types of emotions), but being married to a Dairy Farmer, the separation was bound to happen. I actually felt conflicted – while I knew I would miss my family, I was excited to start some new traditions with TK and my DF.

At first we had planned a quiet, quaint holiday with just the three of us. TK and I would go down to the barn in the morning and “help” dad finish with chores. We’d all come back, have some blueberry buttermilk pancakes, open some presents, take a nap, open more presents and then dad would be off to do afternoon chores and TK and I would work on a nice Christmas dinner including one of our own Jersey beef rib roasts. YUM!

Then my DF’s family was going to be able to join us. Okay, no problem, we’d still do most of the “quaint” Christmas plan, just maybe skip the pancakes and get out a few more roasts for a lunch-time dinner. It would be fun to have everyone up here for Christmas anyway – our little party jumped from 3 to 11! We were guaranteed to have snow and with TK’s older cousins, sledding was a sure bet! Even my DF’s dad was going to be able to make it! How exciting!

Then came the early Sunday morning before Christmas. UGH! TK and I had caught a bug – I was up almost every hour of the night beginning at 12:30 with a stomach ache, having to take care of “business” six times into the late morning hours. I couldn’t keep anything down until late that afternoon. Luckily, it didn’t hit TK as badly. This was the first time he was sick as a toddler and I found that he is a “silent puker” (sorry for the graphic) as it was quite a mess I found in his crib that morning! Ah, the joys of parenthood. He really didn’t seem out of sorts though and by Monday I think we both were somewhat back to normal. That afternoon we got a call that my DF’s family had to cancel – some of them were sick too!

Then came early Christmas morning. My DF was up awfully early – 1:30! I didn’t think anything of it until I ran into him on my nightly walk to the powder room a couple hours later. Oh boy. Yup – he caught the bug too. Poor guy, he still had to muscle up and go down to the barn and take care of the girls too. Luckily, he was able to get some help milking and get through chores early. Phew.

So my quaint, crazy, then quaint again Christmas turned out to be a sick one. And it turned out TK wasn’t really into opening presents despite all the r-i-i-ippping he could do. And a juice incident had the pink stuff everywhere. And my DF really needed all day to rest and get over the bug too. There were no pancakes, no Jersey beef rib roast. We barely opened four presents and mostly spent the day inside. We did get down to visit dad in the barn at night. And then I enjoyed a delicious bowl of Lucky Charms for supper. 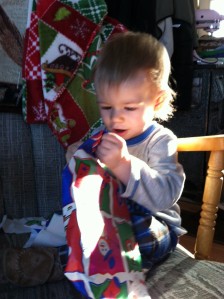 My first Vermont Christmas was certainly one for the memory books – despite starting off as a sick day, it lasted three days and eventually we opened every present, ate our pancakes, rib roast and even had a cookie or two or ten. We watched as TK’s attitude about opening presents change as he figured out what it was all about. It was pretty awesome. The warm feeling created by the decorated and glowing Christmas tree stayed with us throughout those few days and the sparkling snow on the trees with a silver Wheeler Mountain looking down at us only added to the magic.

Happy New Year again, everyone! We are looking forward to an eventful 2013, starting with a big one in March.